One of the most intense and valuable works for its beauty and magnetic capacity that it knows how to transmit, exhibited in the National Gallery of the Marche of Urbino at Palazzo Ducale, is the Blessing Christ attributed to Bartolomeo Suardi, better known by the pseudonym Bramantino, a painter who tradition wants present in Urbino following at least one of Donato Bramante’s return trips, and, in fact, within that court it seems to be possible to find, if not the client of the work of interest, at least the cultural humus that ran through the urban environment.

As much as this canvas represents one of the vertices of 15th-century painting, it can be said that it has, after all, been little studied. The reasons for this negligence may, as usual, be numerous and, to some extent, all justified, but certainly the difficulty of a certain attribution has played a fundamental role. Like many other works, the blessing Christ was found practically in a state of abandonment by Lionello Venturi to the arbori of the last century in the deposits of the Doge’s Palace of Urbino in a somewhat precarious state. It was in fact covered with repainted paper and only after an accurate, very excellent restoration work, it was possible to bring back to light the original painting and prevent it from ending up in some other basement, above the fireplace of some devout urbinate or even thrown away, perhaps during the cleaning of the deposits themselves. It was then initially attributed to Melozzo da Forlì, but Ciardi Duprè dal Poggetto questioned its accuracy, preferring, with more than valid arguments, the hand of Bramantino and, lately, Alessandro Marchi has advanced the hypothesis that it is rather the work of Bartolomeo della Gatta. We do not want to enter into this dispute, for which, among other things, the necessary competence would be lacking, but it can be emphasized that the names of the artists mentioned and candidates for the authorship of the canvas would be enough to capture the artistic value of this work.

It represents Cristo Salvator Mundi in a blessing act and it can be assumed that the left hand held the globe with the typical cross of the reliquaries on it and that recalls in a surprisingly marked way that placed in the hands of St. Francis in the Altarpiece of San Bernardino (today in Brera) by Piero della Francesca. 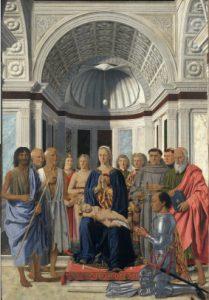 That of Christ is a monumental figure where the geometry of the face predominates in which a fixed but magnetic gaze is nes, whose irises, almost diaphanous, capture the viewer immersing him in the mysticism and mystery of the figure of Christ.

We are faced with a work that fully reflects the modernity and pictorial innovation of the period in which it was made. The drafting of the color is fluid, the brushstrokes short, quick and parallel, with quick lightening through which the light itself, meeting the color, tends to peel. The colors brought to the brown reach an almost olive tone in the face of Christ, and then focus on the bright red of the robe and the intense blue of the manto, almost the figure was wrapped in the dim light of a September sunset.

The perspective and geometric construction also align with the research and discoveries conducted in the Renaissance, where the vanishing point of perspective is located right in the center of the neckline of the Savior’s tunic. The point of view is therefore frontal, placed right at the height of the viewer’s eye so as to capture their attention and stimulate their concentration and reflection. In all this there is a search for geometric abstraction to which the skilled use of chiaroscuro competes.

Needless to say, also for the state in which the painting has reached us, that the absolute protagonist of the painting is the face of Christ. The head can be defined perfectly geometric, and gives the figure an almost still expression, suspended over time, but at the same time of a very high sweetness and communication. The transparency of the eyes has a universal aspect, as if all the possible light had concentrated in that diaphanous color, but in the same way, with that fixity focused on the ness or the whole of humanity, they emanate almost a magnetic force from which it seems impossible to separate, to look away. And precisely these characters bring the memory back to another Christ, equally motionless as a column of marble, equally magnetic in the fixed gaze before him, indifferent, or rather, immune from everything that is happening around him: that of the Baptism of Piero della Francesca di Borgo San Sepolcro today at the National Gallery in London.

These are just a few traits of a description that could go much further, of a work that, in my opinion, stands at one of the top of Italian Renaissance painting and to be inscribed, at least as a suggestion, to the environment of Urbinate; a work in front of which, however, too often you can see the patrons of the Doge’s Palace, pass with a certain indifference, perhaps not captured by the signature, very important for the period, but not so publicized by the media as for other excellent artists.